Host Rob Markey talks to Beth Johnson, chief marketing officer and head of virtual channels for Citizens Financial Group. Big things have been happening at the New England-based financial services company. After 26 years as part of the Royal Bank of Scotland, the company returned to the public market in a 2014 initial offering that raised $3 billion. And the bank has been undergoing a multiyear turnaround effort that has put customers at the center of its business. Beth has been a key player in these efforts since she joined the company in 2013.

In this excerpt, Rob and Beth discuss how innovation in banking has changed the customer experience:

ROB MARKEY: Have you educated shareholders about the things that you're doing so that they expect this kind of profile of investment?

BETH JOHNSON: If you look at our quarterly earnings announcements or some of the speeches that Bruce (Van Saun, chief executive officer), Brad (Conner, vice chairman of consumer banking) or John Woods, our CFO, has done,—I'm speaking at a conference next week—we talk a lot about the investments, customer journeys, data and analytics that are going to get us to that next phase, and that’s being a top-performing regional bank over time.

ROB MARKEY: One of the things that we see at least some companies doing is clarifying the focus on customer lifetime value, and then making sure that they're very clear about the path between here and where they're heading, so that they can make clear to investors, “Here's the profile. This is what it looks like. It takes a while for these things to play out. We're going to continue to invest, regardless of the economy.”

BETH JOHNSON: We're not quite at that stage yet, but we have talked a lot about the importance of it.

ROB MARKEY: When you laid out these goals, presumably you also had interim stepping stones, the milestones that you were looking to achieve. How do people in the product teams, the channel teams and the functional groups view their role in achieving the goals that you have?

BETH JOHNSON: One of the things we tried to put in place is shared goals at our consumer level so that all the leaders on our consumer team are marching towards the same goal of primary household growth. We have made huge progress there, and we’re really starting to see that. As a part of that, there are some very specific customer goals that everybody has around what do we need to do.

It's all about making it easy to bank with us. We're tracking that in the different groups, and progress against that goal, as well as overall NPS® in our different groups, in both channel and products. So we really are trying to make it so that we're all moving towards a common goal, and have common metrics and things we're going to be held accountable for at the end of the year as individuals, but so it all comes together in a way that makes sense for the bank overall.

ROB MARKEY: That's one of the challenges that you always have. A functional leader or a channel leader has a set of goals that inform a set of metrics and budgets that they're responsible for. And at the end of the day, that drives them pretty hard. And of course, even if the top-level leader has something shared, once you get down two, three layers into the management team, people tend to have goals that are much narrower and much more functionally-oriented. Is that something that you’ve taken on?

BETH JOHNSON: We have started to take that on. So we do try to have customer-oriented goals at multiple levels down. So we don't have it everywhere yet, but it's been a goal of the leadership team to try to get it as many places as possible, where it's relevant, and we can showcase it.

ROB MARKEY: In banking, there have been multiple waves of technology innovation, especially around channels. A long time ago, I took a look at what happened when ATMs were introduced. And contrary to what everybody expected early in that deployment, branch visits didn't decline. They continued to grow while ATM usage grew. Everything was additive. It was just that more transactions were flowing through. It was adding to the cost of the banks.

Here we are reasonably deep into the digital transformation. Are you seeing, finally, transactions draining out of call centers and branches or is this, again, additive?

BETH JOHNSON: It's both. So you absolutely are seeing, across the industry, that transactions are coming out of the branches, depending on your source, somewhere between 8% and 10% a year. And so you have to start to think about, “What does that mean? How do you think about it? How do the channels play together in the right way?”

By the way, it's also the case that transactions are going up overall. So your branch is coming down, but your digital transactions are more than making up for that. Now that you can check your balance on your phone, people are checking their balance on their phone every day. And people are able to move money so easily between accounts. There are just things you can do with your phone that you end up having more interactions rather than less, but they're in different places.

ROB MARKEY: Interesting. One of the hypotheses that people have is, “We're going to take a lot of the routine, repetitive work out of call centers, out of branches, out of any human. We're going to make that digital.” And what remains is more complex, more difficult and requires greater skill. Is that pushing you, then, to hire differently, train differently?

BETH JOHNSON: It's interesting. We talk about being bionic—that's the word we're using now. But how do you think about being really explicit in the future about the role you want people to play, and the role they're going to play in the branch versus the contact center versus what you're doing digitally? It's too easy to fall into the notion that this has been a very people-based business for a long time. So let's really think it through what we want to have and where.

We've absolutely talked about the fact that the people in your branches need to change over time, not only the role they're going to play, but also the tools you provide them. It’s not just about having advice-based people in your branch. It's about how you think about that interplay between the different channels and tools that will enable us to be helpful there.

ROB MARKEY: Does that make you think about different kind of branch configurations?

BETH JOHNSON: Yes, absolutely. We're always testing configurations. Do you have cashless branches, where you can only take cash out? That changes that need for tellers. It changes a lot of the cost structure, frankly, of the branch, and frees people up for those advisory conversations. We're testing that. Everybody in the industry is testing that right now.

ROB MARKEY: In the time that you've been in this role, what is the biggest change that you've seen in the industry?

BETH JOHNSON: It's the pace of change. When I look back and think about what's changing with the customer, what's changing in the industry. We knew the pace of change was quick. But if you look at the role that data is playing, the role that artificial intelligence is playing, the pace at which we're getting to personalization, and being able to deliver those experiences, it's just getting faster and faster.

So we have to adapt relatively quickly. And you have to think about how you are going to pay for that. How are you going to pay for those investments? And that's where the branch network really comes into play because it's expensive to have a retail network. And you have to think about what's the right network to have at the right cost structure to fit in that personal world going forward. 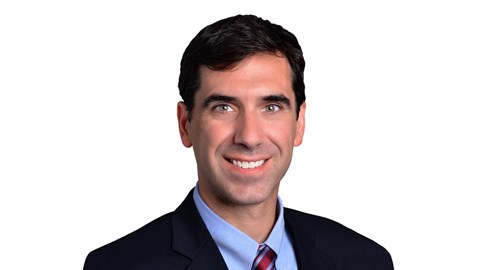